A film far too relevant for our own times, The Devil’s Advocate should be a film shown in schools. A non-educative film, of course. There are films shown in schools about sex, birth control, how to find a job, what life choices to make – so why not show The Devil’s Advocate straight after ‘How to have sex without facing the consequences’ and ‘How to be a millionaire and ensure an empty life’?

“It is not materialism that is the chief curse of the world, as pastors teach, but idealism. Men get into trouble by taking their visions and hallucinations too seriously” – H. L. Mencken

As part of a drive to attempt to stem the all-consuming nature of our materialistic, greed-filled society, I’m sure I’ll be ranting on about this film for as long as I can. The Devil’s Advocate is a very interesting film, and a glossy example of the barren life Socrates often warned of: “Beware the barrenness of a busy life”. Many people, I’m sure, would like to see their favourite quotations, mantras and motivational one-liners pasted onto the big screen, and this film could well indeed be one of them.

“Better to reign in hell than serve in heaven, is that it?”

The Devil’s Advocate begins in the courtroom with Kevin (Keanu Reeves), the guy we all know – the slick, suave, handsome and ambitious yuppie (who has a heart, but we don’t see that until the closing moments of the film) manipulating his latest case – which will be his 64th  win in a row. The case involves a school teacher accused of molesting a young girl from his class; he is guilty, but to set the tone for the film and to convey Kevin’s ability as a lawyer, he manages to win the case in favour of his paedophile client.

From here on out, I shall call in each instance every  Tom, Dick and Harry  that falls into the trap of mistaking ambition and want of a better life for greed – ‘Kevin’. So, this is for the Kevins of the world, and more specifically, the ones who have been lost to Kevin’s greedy and soul-annihilating ways.

A strange conflict lies within the film’s Kevin who hails from California (not exactly the Slums of America, but is treated as so when his hotshot colleagues in New York discover his origins). His equally beautiful wife, Mary Ann (played heartbreakingly well by Charlize Theron) is also reminiscent of the stock Southern, well-meaning and altogether naive woman.

With her darlin’ Southern accent, her ideals and ways of life are contrasted subtly and brilliantly when she moves with her husband to New York. This new job offer would mean that the couple earn so much that she would not need to work anymore, something Mary Ann has been doing since the age of 13. Couple this loss of working life with catty, and ultimately ominous ‘friends’ and neighbours – much like Rosemary’s Baby – and the results have potential to be fatal.

“As time goes on we get closer to that American Dream of there being a pie cut up and shared. Usually greed and selfishness prevent that and there is always one bad apple in every barrel” – Rick Danko

This is the general synopsis of The Devil’s Advocate, and the film is a feast for philosophers and film-decoders alike. The amount of symbolism and imagery is enough to make you want to write an entire essay but, I will focus on four things: the consuming nature of power, greed, arrogance and vanity. It turns out that Kevin is working for the Devil himself (Al Pacino), after a while of suspicion and frankly, awe at what the Devil can do.

I’d like to take a look at the film’s portrayal of losing one’s identity; the journey of regression and the paradox of losing everything in the pursuit of (what I believe is) nothing.

“I’ve nurtured every sensation man has been inspired to have. I cared about what he wanted, I never judged him. Why? Because I never rejected him, in spite of his imperfections. I’m a fan of man!” – The Devil.

The first victim of The Devil’s conspiring and Kevin’s neglect is Mary Ann, who – with her luscious and entirely beautiful head of curly hair – is encouraged by The Devil to cut off her blonde locks (a primary symbol and indicator of strength and health) and dye it black (note: The Devil was also a fan of Aeon Flux). Simultaneously, Mary Ann begins to see that her ‘friends’ are demons and hideous creatures (which of course, they are, even if only in terms of personality) and she is – as is always the case – deemed “crazy”.

Mary Ann’s cutting of her hair symbolises her willingness to mould to her husband’s new life – the “high” life, it may be called by some hedonists. If losing your roots, values, principles and the ones you love are what you’d call the “high life”, you can be as high as you want; keep me close to the roots in the ground. Mary Ann, I think, would agree with me as I say; progression is not the same as uprooting your life. Evolving is not about changing your physical appearance. And following someone is definitely not the same as being loyal.

Pacino’s Devil encourages Mary Ann to lose herself in what he believes is right; beautiful. He advises her to be less natural, more socially aware and simply, forcing her to become someone else. Of course, Mary Ann was never obliged to follow this advice, but she did for her husband. 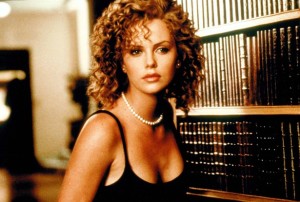 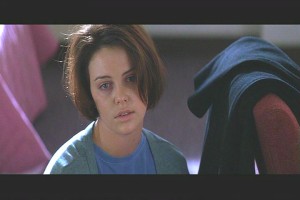 “No drug, not even alcohol, causes the fundamental ills of society. If we’re looking for the source of our troubles, we shouldn’t test people for drugs, we should test them for stupidity, ignorance, greed and love of power” – P. J. O’Rourke

The Devil’s advocate is the captivating story of the seductively destructive nature of power, greed, lust and the dangerous roads to these pitfalls – success and materialism.

“When do we talk about money?”

Another interesting aspect of The Devil’s Advocate is the current film of the unexpected, the unforeseen. The Devil always mentions that his favourite times are the unexpected, and obviously so; these are times when we humans are weak, powerless and desperate. Convenient times for The Devil, I should suspect. 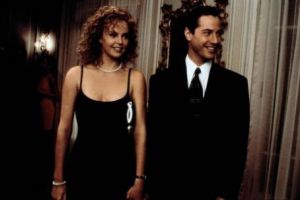 “If you can’t have a relationship with your husband, you can at least have one with his money.”

The Devil’s Advocate is a powerful and forever interesting film about the dangers of losing your way in life, pursuing what you believe to be the right things and more importantly, pursuing things that you are told are right.

“Do not follow vain desires; for verily he who prospers is preserved from lust, greed and anger” – Abu Bakr